Be Careful What You Wish For

Be Careful What You Wish For

On Saturday 2-Jan, our hostel had its “Full Moon” party.  Was a great party, all Mancora was there… except I had to wake up at 7:00 next morning and even by then,  the “leftovers” (drunk & high) people were still going at it.

Kilometer 1,294; Mancora, 3-Jan-10 @ 8:15: With Raul, Belen and Karl (a Dutch on a Kawasaki 490 riding north to Ecuador), we headed on a ~490 Km trip back to Ecuador via the Andes this time, up to Loja – Kilometer 1,798; Loja, 3-Jan-10 @ 17:45.  Once in Loja a local motorcyclist, Leonardo on a KTM 990, invited us to his place.  Now get this: his father’s house is a medieval/crusader type castle… in the middle of the Andes!  Hilarious sight, you got to see it.  We all sat in the reception hall discussing the different aspects of the road down to Peru while waiting for Barry to arrive.  Once he finally did (it was really late) we continued with Karl to Vilcabamba – Kilometer 1,846; Vilcabamba, 3-Jan-10 @ 22:00.  Vilcabamba is a quiet little town set in a gorgeously vibrant green and flowery valley where it is said its people live well into the 100’s.  So tons of gringos come to live here, hopping for the same… somehow no-one told them they should cut down on the hamburgers or smoking ;).  As for us, we arrived so late that all the stores + restaurants where closed.  We had to ride around town, knocking on a few store doors until an old lady had pity on Barry 🙂 and opened her store for us to buy some bread+ham+cheese.

We stayed a day in Vilcabamba hiking the surroundings.  By late afternoon, the clouds moved in and it rained all night up to the next morning.  Barry and I still planed on heading out but waited until 10:45 prior to hitting the road toward the Peruvian border; this time I wanted to cross via La Balsas located in the eastern tropical forests of Ecuador/Peru.  Not even 15min into our ride it started raining again.  The already muddy road soon turned into a pig pit, roads became flooded and landslides blocked the way.  My plan was to take the scenic off-roads to Peru… I was served: rain, fog & mud… talk about scenery!  We did ~60Km in 6 hours!  The whole time I did not switch from 1st gear.  You just can’t.  And I had road tires (vs. off-roads) which made things worse; my rear tire kept on fishtailing and whenever I hit a deep muddy section the front wheel would dig in and locks.   At one point the mud was so deep I got stuck.  I tried to put my foot on the ground but it just sank in the mud and it too got stuck.  Next thing you know, the bike starts tilting sideway and I just couldn’t hold it.  It must have been the softest fall ever, although kind of dirty.  During this endeavor both Barry and I fell once each.  Slowly I adapted to the conditions, changed my riding style or changed riding position (stand-up, push on pegs, pull handlebars,…) to achieve better balance and tackle these road.  Bref, it was a sort of a trial and error, I learned to handle the conditions as I went along.  Most important lesson?  Try hard to never-EVER stop: when there’s mud just give it (softly) more gas.  Crucially, always balance with the feet by pushing on the footpegs.  Some movement, especially to tackle steep or slippery turns were counter-intuitive for me, opposite to what I was used to do when riding my RR in TO!  AnywayZ, I’ll stop boring you with the details but damn it was tough, a complete muscle workout.  We finally had to stop in Palanda (Kilometer 1,926; Palanda, 5-Jan-10 @ 17:15): the road ahead was blocked by landslides and beside, it was getting late.  We stayed at the $4 “Marriot” of Palanda :)… No comments.

Next morning, more of the same but by noon time the rain subsided, the sun peaked out through the clouds and the roads got somewhat dryer.  Hey, I switched up to 2nd gear, even sometime 3rd!  Wow!!;).  Honestly we were lucky the weather conditions improved; the mountains were steeper & composed of red earth and the roads became narrower, just a path with 2 tracks.  See, very few people uses this border so with each village you pass the road becomes worse for lack of traffic.  It would have been extremely challenging to ride through here under heavy rain, I even wonder if we would have made it to Peru.  But we finally hit the border village of La Balsa (Kilometer 2,008; La Balsa, 6-Jan-10 @ 14:00) to the pleasure of Barry.  I’ll leave the details out, however you can read the huge problem Quiport and him are facing vs. the Ecuadorian government (just Google it or click HERE).  As for Peru’s Balsa border, what a joke.  The Peruvian custom agents where drinking at a party somewhere in the village (they start early here, it was 14:00).  I actually had to go search for them to get them to do our paperwork… of course, once done we had to tip them for the beer they missed :).  AnywayZ, 2 hours later we finally were on our way heading toward the first major village, San Ignacio, where we crashed for the night (Kilometer 2,060; San Ignacio, 6-Jan-10 @ 17:20).  We even went to a street party at night which was a kind of an “interesting” mix of drink and bad Cumbia music.  Naaah, we didn’t pick up ;).

Next morning, after a full cleanup of the bike, especially the chain, our aim was to reach Chachapoyas 310Km away.  50Km into our ride pieces of asphalt started appearing (finally).  As the roads improved and we were happily cruising toward Chachapoyas, we were stopped by the Peruvian police near Jaen:  a delay of ~1 hour because we did not have Peruvian insurance (SOAT).  Kilometer 2179, Jaen, 7-Jan-10 @ 12:40: We searched all insurance offices and bank outlets in Jaen but no-one will sell SOAT on a per month basis (and I still can’t find a company which can sell me insurance! The year costs U$D225).   We had no choice but to continue our road and live with the consequences.

Now we were riding on a beautiful paved road with smooth asphalt & fully signed.  The route was carving its way through a very long, narrow and deep valley surrounded by steep mountains with the roaring Utcubamba river on our left side.  A few landslides have destroyed certain portions of the road but there were workers and machines hard at work repairing them.  Montrealers, you would be jealous of these workers and the quality of the roads!  These are difficult terrain and even harder weather conditions but the engineering work is absolutely excellent.  As for the Pony Show guys, man, these twisties are calling for more horses 🙂  especially the last 70Km climbing ~1,500 meter to Chachapoyas (Kilometer 2371, Chachapoyas, 7-Jan-10 @ 18:40). And of course, the cloud forest scenery was mesmerizing (See details of our Chachapoyas visit below).

Unfortunately we could only spend 1 day in Chachapoyas before heading to Chiclayo because Barry needed to get to Canada ASAP.  560Km separated us from Chiclayo: We rode down from Chachapoyas to the tropical forests then head west through the valleys before heading up the Andes mountain (up to ~2,200m) and finally down to the coast to reach our destination at sundown – Kilometer 2932, Chiclayo, 9-Jan-10 @ 20:35 (See details of our Chiclayo visit below).

Barry flew to Canada a couple of days later (he had to arrange shipping his bike back to Quito first).  As for me, I stayed one extra day to visit Chiclayo’s surroundings before heading south.  I was aiming to reach Lima in 1 day but preferred to crash in Barranca (Kilometer 3553, Barranca, 13-Jan-10 @ 17:30) 180Km North of Lima; better enter Lima during the day.  Besides, will also allow me to visit the nearby Caral ruins.  The whole ride to Barranca was a boring one through mostly desert.  And don’t go imagining an Arabian desert with its golden sand dunes.  No, here it’s rocks and gravel desert or hard packed dark earth.  Sometime sand was blown on top of the roads forming tiny dunes, making it precarious to hit these at 100+klicks.  But that was nothing compared to the Peruvian Policia de Transito.  I was again stopped several times for whatever (stupid) reason they can come out with to extort money from me.  I had to play “dumb” with them, only speak in French and use similar tactics as in Ecuador to get out of their fangs.   The only funny moment from all these incidents was the unique time I had to pay for what they insisted was an infraction (long story): the cost? half a chicken :).  Honest!

ECU-100104 – Vilcabamba – We hiked nearby mountains (here to Mayobambo) 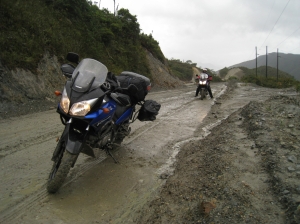 ECU-100105 – to Valladolid – These mud passages (from landslides) are just brutal. 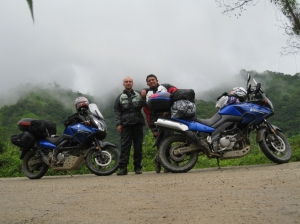 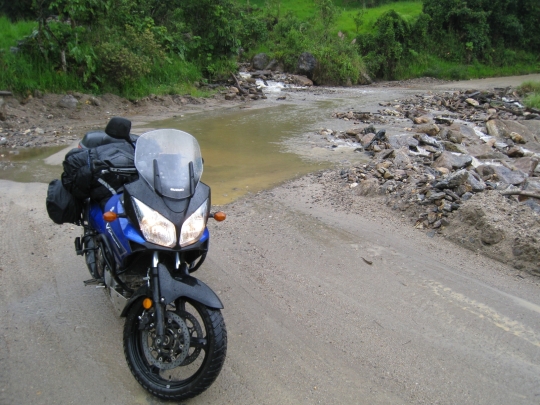 ECU-100105 – to Valladolid – We passed lots of these “rivers” & ponds…at least the bike gets a quick wash. Although the pond rocks hit hard the bike’s skid plate. 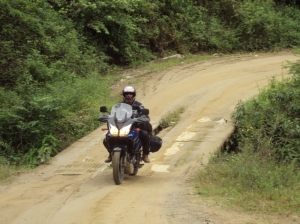 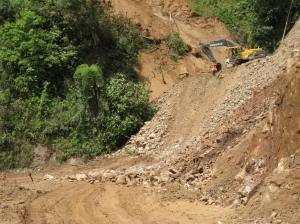 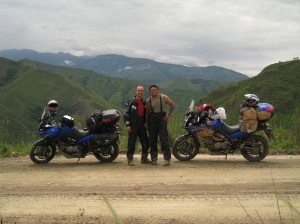 Changes For The Better

Where do you want to go today?